Bike Hotel in Sirmione, the best place to ride on lake Garda.

Sirmione and you’re in the heart of Garda, hills or plains, mountainbike trails, routes for cyclists, cyclists tours between medieval castles, wineries and old villages of the country where there were historical battles or follow the placid river Mincio with children. Here are routes for all legs.

Among hotel facilities for cyclists that you find in hotel Smeraldo there are paper maps of mtb routes around lake Garda, easy cycle paths, free bikes suitable for riding around Sirmione or mountainbikes rental with custom equipment, secure storage for your bike (or you prefer to take it in the room), washing area with bike maintenance and support tools; mechanic nearby, mountainbike tours from May to October with bilingual guide in various localities of Garda area. (The guided tour service is temporarily suspended)

In collaboration with UBMajor, from May to October, the hotel offers to its guests some guided tour by mountainbike in some localities of Garda area, tours are totally free for those who use their own bike and are also suitable for families with children of at least ten years.

Garda on Bike, here below som of our mountainbike tours

Lonato – Esenta, Roman kilns: bike tour of a few kilometers in the countryside around Lonato, passing through the village of Esenta and visiting the archaeological site of Gorghi kilns from Roman times

Peschiera-Valeggio-Custoza-Salionze: Relaxing route along the river Mincio to get to Borghetto di Valeggio, then going up to Custoza and returning to Peschiera going from Salionze

Desenzano and its hamlets: Starting from Desenzano a path inland to visit places of historical interest but less known

Sirmione-Pozzolengo trough lugana vineyard: A pleasant bike ride departing from Sirmione Castle, passing by the places of the Battle of Solferino and San Martino and continuing through the vineyards of lugana to Pozzolengo

Sirmione-Desenzano skirting lake Garda: A short and easy path to visit some historic places of Sirmione and Desenzano enjoying some wonderful views on Garda

We are part of the Brescia Province project GardaBike Hospitality, hotel selected and certified to host tourism cycling 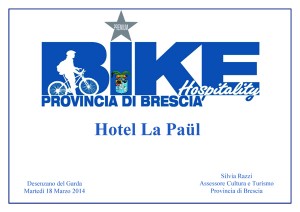